“I swear to you, Marin, every day I go to check on them, and every day there’s something wrong with them.  I don’t know who’s tripping over what or doing what wrong…but something keeps screwing up one or two wards.”
I frowned, arms crossed tightly beneath my breasts as I watched the sun start to creep up beyond the trees and broken buildings.  Kellin and I stood near the edge of the ravine, near the ward-lines, water buckets near our feet.  She’d stopped to check the ward nearest to our descent point, finding the edges of the circle broken and half the herbal components gone.  “What do you think it is?”
“What or who,” she said, frowning as she fished a piece of chalk out of her pocket along with a zipper baggie of herbs.
“It’s been windy lately.  Could be that the herbs keep blowing away, maybe leaves or something are disrupting the circles.”
Kellin grimaced.  “I wouldn’t be so concerned if I thought it was something as simple as that, Marin.  I think this is deliberate.”  She glanced up over her shoulder at me.  “But who would be doing it?”
Don’t know.  Jac wouldn’t touch anything like this, and from what Rory said, based on Thom’s reaction to the one he almost tripped over, Thom wouldn’t be screwing around with them, either.  Who would?  Leah?  Stasia?  One of the staffers that doesn’t know any better, or thinks it’s voodoo mumbo-jumbo, Antichrist-worthy, demon-summoning evilness?  I suppressed a snort.  If anyone thinks it’s that, they’re not going to like it when we run that copper cabling Rory brought back around the camp and bury it in a ring around us.  The copper, along with a little sprinkling of salt, would act as a protective circle around our settlement’s perimeter.  We’d probably still need wardings, but the circle would certainly help—or so I was hoping, based on some of the reading and practice I’d done in the past.
Of course, if I was wrong, it wasn’t like we’d paid for the copper anyway.
I finally shrugged.  “I don’t know.  How are we going to find out?”
“I don’t know.”  She frowned, shaking her head as she started to clean up and reset the ward.  “I guess we just have to be hyper-vigilant about them, so nothing can violate the wards again.  They’re supposed to keep us safe.”
“And they can’t do that if they’ve screwed up, not really.”  I grimaced, looking around slowly.  They had stopped the winged creature that chased Drew, Carolyn, and J.T. back here, but not for long.  Whatever the three had done to get rid of the thing, though, had worked quickly enough that I hadn’t even managed to realize what I was feeling before it was gone.  It was only when Carolyn told Kellin and I later that I realized what had happened at the wardline, what the sound I’d heard was.  “Why do you think Carolyn keeps saying it was something she did that stopped it?”
Kellin rechalked the marks on the stones, eyes lidded for a moment.  She didn’t answer until she was done dumping energy back into the ward, straightening slowly from her crouch after she’d finished.  “I don’t know.  Protecting someone, maybe?”
I snorted.  “Which one of them, Drew or J.T.?  Or someone else?”  Hell, I don’t even have a full handle on what happened there.  “I don’t know who or what she’d be protecting, Kel.  The fairies?”
“From the way the Shakespeare garden looked, I’m not sure they’d have that kind of power.”  Kellin scooped up her bucket, looking at me.  “You didn’t sense anything?”
“I didn’t have time.  By the time I realized I was feeling anything, it was all over.”  I shook my head a little, chewing my lower lip.  “I was with Jac and Matt, and they didn’t seem to hear anything, not like I did.”
“Probably because they’re not Awake yet.”
“Maybe,” I said, frowning slightly as we started down the winding path toward the river, where we’d draw water.  “Have you talked to J.T. about what happened?”
“He’s been kind of avoiding me.  What about you?”
I grimaced.  “Same.  It’s weird, that’s never happened before.”
“Sounds like he might be the one Carolyn’s protecting.”  Kellin glanced back over her shoulder at me, hitching one shoulder in a shrug.  “I don’t understand why, either, but I don’t know what he could’ve done.  You have any clue?” 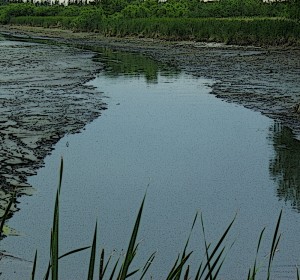 I thought about that for a moment as we picked our way down the still-muddy path down toward the river, which was still running high.  Some of the paths were flooded, and that’s where we’d been getting cleaner water, as the runoff from the ravine flowed down into the river.  I finally shook my head.  “I haven’t noticed any sensitivity to anything in him before.  All I know is that he’s never though I was crazy, even when Thom started to think I was.”  I shrugged.  “Maybe that was because he knew there was something going on beyond his perception.”
“Mmm.”  We stopped near one of the streamlets flowing toward the river and Kellin crouched down to fill her bucket.  “He’s been jumpy the past few days, too.  Watching things that aren’t there.”
I snorted humorlessly.  “In his defense, so have the cats.  And Birtha.”  Birtha was one of three full-grown sheepdogs that Paul and Angie had brought back with them.  She was a sweet dog, more interested in her newborn puppies than anything, and got along well enough with the mother cat we’d adopted.
Kellin’s tone was gentle, but firm.  “You and I know full well that animals are as sensitive if not more sensitive than we are to anything unseen.”  She finished with her bucket and then took mine.  “How’s your arm?”
I rubbed the lingering cold, sore spot on my arm.  “Still sore, still cold.  No change.”
“Did you feel anything when you heard the sound?  Or when the radio went?”
“I was concentrating on something else at the time.”  I grimaced, trying to think.  I’d had trouble gripping tools right before the radio exploded and Matt was hurt.  If I’d felt anything while I was sitting with him and Jacqueline afterwards, I couldn’t remember it.  “I might have felt something and not realized it,” I finally said, shaking my head a little.  “I need to concentrate on sensations more—I’ve been getting distracted easily lately.”
Kellin grunted and handed me my bucket.  “I’m not really sure any of us can afford that.”
I inclined my head and shrugged again.  “Probably right.  But that doesn’t change the basic facts.”
“Not one bit.”  She sighed as we started back up the path.  “We’ll just have to watch, I guess.  Keep an eye on who gets near the wards.”
“It’s all we can do, Kel.”
“I know.”