He met me near the ward-lines about ten minutes later, shrugging into his battered leather jacket, the one without the spikes that he’d only started wearing late last winter.
“It’s not that chilly,” I said quietly, watching him as he walked toward me.
J.T. shook his head.  “It is to me, but I’m not so sure that’s not psychosomatic.  C’mon.  Sooner we’re out of earshot, sooner I can stop being paranoid about someone overhearing us.”
Shit, he’s really rattled.  I frowned, jogging a few steps to catch up with him as he breezed past me, heading down toward the ruins of some of the suite-style dorms.  We passed where they were trying to dig wells, past where they were starting to dig shallow trenches for whatever heating system Thom had engineered.  Matt waved to me as we passed and I waved back, then picked up my pace to keep up with J.T.  The midmorning sun peaked through ragged clouds, giving us glimpses of blue sky tinted with other, stranger colors since the stone rain more than two weeks before. 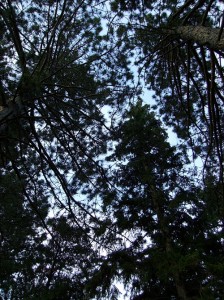 It’s been more than two weeks.  God, it seems like forever and yet…  I suppressed a shiver and followed J.T. down toward what had been a sledding hill, one upon a time, heading down toward the ravines and the river.  He didn’t say a word until we were at the bottom of that hill and had hiked through some of the trees and over to one of the clear-running streamlets that emptied out into the Grand River.  He sat heavily on a rock and I joined him on another nearby, brows knitting.
“I’ve been having the dreams since I was a kid, but I didn’t completely understand them until…recently,” he said, staring at the water rushing by.  “I didn’t realize I was dreaming about the long-dead.”
Oh holy hell.
He glanced at me sidelong and smiled weakly.  “Yeah, I know.  Sounds crazy, doesn’t it?”
I swallowed the bile that had suddenly risen in my throat.  Yeah, crazy.  Dreaming about ghosts.  Not just any ghosts, either.  Ghosts of people who died…who knows how long ago?  I put a hand on his knee and squeezed.  He laid his hand over mine.
“It looked like the tarn near my nan’s cottage in Scotland, but I knew that wasn’t the place.  The huts were wrong—all stone with bark and thatched roofs, no glass for their windows.  And the people…all in cloth and hides and soft leather.  Not like us.”  His lips barely moved as he spoke, fingers tight around mine as he stared at the trees.  “I keep seeing this woman—old, long white hair, wearing a torc around her neck and some kind of circlet.  Beaten silver, both of them.  She looks old, but she doesn’t move like she’s old.  She comes out of one of the cottages as the sun’s going down and walks to the edge of the tarn, then she looks at me like she knows I’m there, watching her, even though I’m dreaming.
“ ‘Don’t worry,’ she says.  ‘Don’t worry, my dear boy, you’ll see me again.’  Then she just…falls face-first into the tarn.  She sinks and she doesn’t try to swim, and I can see her spirit rise out of her body  and she smiles…and then disappears on the wind.”  He was white-knuckling my hand, now, voice barely a whisper.  “I see it over and over, every time I sleep—at least once a night, usually more than once.  Then last night, there was another dream, after the first one.
“It was in the same village—that much I could tell, I was sure of.  We were carrying a body on a bier out to a cairn.  I knew it was the woman from the other dream.  There were so many people crying, weeping—keening, Mar.  Whoever she was, she must’ve been really important to them.”  He went his lips, then continued.  “There was a stranger by the cairn, a red-haired man in a black cloak with a half-mask.  For some reason, I remembered thinking that he shouldn’t have been there, that they’d all gone away forever, and why the hell was he here now instead of days ago, when she was throwing herself into the tarn?  He smiled at me when we got there, but it was a sad smile.  Then he said, ‘He loved her well and truly, loves her still, and will love her again in some tomorrow yet to come.  He loves you and yours and hopes someday he can forgive himself as she forgave him.’  I remember setting the bier down, and that stranger came to me and put something in my hand.  ‘I will see you again someday,’ he said to me, then he just walked away.  And I keep waking up before I can see what it is he’s given me.”
He tore his gaze away from the trees and looked at me.  “I don’t know what they mean, Marin.  I don’t know what they mean and that’s got me scared shitless.  I keep trying to convince myself that they’re just weird dreams, but somewhere, deep down, I know they’re not.”
“How do you know?”  I whispered.
J.T. laughed a bitter, almost hysterical laugh, shaking his head.  “How do you know your visions are real?  My gut tells me so, Mar.  That’s not the worst of it, though.”  A muscle in his jaw twitched.  “The woman, the one who I keep watching commit suicide…I know who she is.”
“I thought you didn’t—”
He shook his head quickly.  “Not who she was.  I’ve got no idea who she was or why she did that.  But I’ve got this weird feeling I know who she is now.”
Who she is now?  What, reincarnation or something?  I didn’t think he believed in that.  Hell, I’d only half convinced myself that I believed in that.  “I’m almost afraid to ask who.”
Smiling a humorless smile, he shook his head again.  “It’s not much better for me, I promise.  But I think it’s Kira.”
Kira…do I know a…oh!  “Wait…”
He nodded grimly.  “That’s right.  Thom’s cousin.”