I didn’t go to check on Kellin, or even to distract Jay when I left them together.  I headed for the cubby I shared with Thom to retrieve the cards.  They’d been a birthday gift from Rory and Drew years earlier.  I’d only taken them out once since the end, those first hours after shit had hit the fan.  A part of me was still afraid of what would happen when I spread the cards.
I told myself I couldn’t keep denying the urge to read them, to use my Tarot deck for the purpose they were intended for, and now was as good a time as any.  I didn’t have anything to be afraid of.
I was probably lying to myself, but as I stripped out of my muddy clothes and rummaged around for clean jeans, a shirt, and the deck, I decided I didn’t care.  My mind was made up.
I had questions, and I would have answers.  Damn the consequences.
I shimmied into clean clothes and laid out the cloth that I used to wrap the box I kept the deck in.  I knelt down on the mattress in front of the cloth, the cards slipping through my fingers as I shuffled the deck, starting to concentrate.  There was something soothing, relaxing about handling them, though I could feel my fingers beginning to tingle as I kept shuffling them.  I concentrated on Thom as I sifted through the cards, eyes lidding, fluttering as if I was dreaming.
The trance broke once I’d laid the cards out before me, just three—a simple spread.  I was too afraid of what a more complex one would tell me.  A simple past, present, and future spread was better, less threatening to my psyche.
That’s what I thought, anyway.
I had to take a deep, steady breath before I could look down at the cards I’d laid out, and I was glad I had.  My lips thinned as I stared at the cards before me. 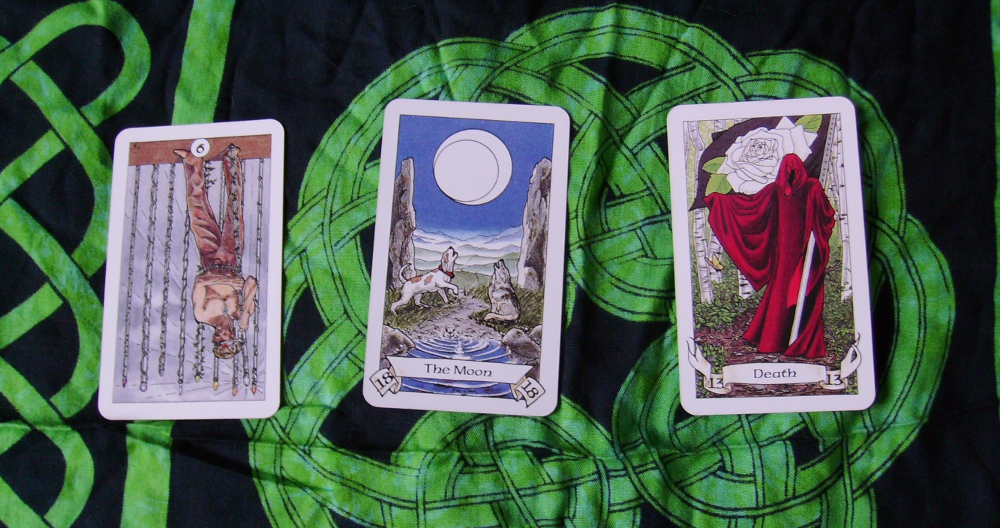 “Thom!  Behind you!”
I watched with growing horror, as if we were all trapped in slow motion.  The creature reared back with a massive paw, bigger than my head, lifting it to strike Thom from behind.  He spun, looking around wildly—he couldn’t see it.
Oh god.  He can’t see it!
Then, at the very last possible second, he stiffened, then dove.
One of the thing’s claws caught him over the shoulder, sending his dive into more of a tumble, but at least it hadn’t broken his neck in one blow.

I shivered a little.  Whether or not he believed, whether or not Phelan convinced him, the damage to his abilities had already been done.
That’s a conversation for Phelan and I—or Phelan and him—to have at another time.  My hands curled into fists on my knees as I stared down at the cards.
A new one lay across the top of the spread.  It must have slipped from the top of the deck while it was still in my hand, while I had my vision.
The Star.
Hope.
There was always hope.