Firelight lit the stranger’s face as he smiled faintly in response to the question asked.  “No, you’re not the first group of survivors I’ve run into, not by a long shot.  It was a long ride to get here.  You’re more hospitable than a lot of the groups I’ve run into, though.”
Next to me, Thom leaned back, frowning slightly.  “How so?”
The man smiled.  “You didn’t shoot first and ask questions later.”
“You crossed the wards,” Kellin said quietly at my elbow.  “Clearly, you’re one of the good guys.”
“I certainly hope so,” he said.

“Gods and monsters!  What kind of wards are you putting up here?  They could rattle a body’s teeth.”
I stiffened at the voice, blinking.  At first, I thought it was part of the vision I’d just snapped out of until I realized that J.T. had stiffened next to me, rigid and not daring to look toward the voice’s source.
I stood a little too quickly and spinning on my heel.  I started to fall sideways as I put too much weight on my weaker leg in an attempt to spin faster.  Rory caught me before I toppled over.  I leaned on him until I felt steadier, staring at the approaching figure.
He looked like he’d been walking for a couple weeks, at least, boots and jeans spattered with mud, leather jacket battered.  His red hair was unruly with a little bit of curl, a little bit of wave, and fell in a damp tangle down to his shoulders.  He was good-looking enough, with angular features and faint freckles brought out by the sun.
He felt familiar, though for the life of me I couldn’t figure out why.
“Who are you?”  I asked.  Who are you and how can you feel these?  How do you know what they are?
He grinned at me, a mischievous, playful grin despite the fact that this was probably a time he should have been serious.  “Sorry.  Forgot we’ve nev—”
“Phelan,” J.T. said abruptly.  “Phelan O’Credne.”
I startled, blinking and looking at J.T.  He was shaking, hands curled into fists as he stared at the newcomer.
The man simply shrugged.  “I go by Phelan Conrad now, but if you insist.  Did we know each other?”
“Yes,” J.T. said tightly.
Now all three of us—me, Rory, and Carolyn—were all staring at him.  J.T. took a few deep, slow breaths.
Oh, Jay.  What the hell is going on here?  How do you know him?
“You gave me something,” J.T. continued, ignoring me even as I put a hand on his arm and squeezed, my fingers digging into the bare flesh of his tattooed forearm.  “What was it?  That day by the pyre, what did you give me?”
The figure stared at him, a puzzled expression melting into a grim one.
Oh god.  The dreams.  He saw him in those dreams.  I looked at J.T. in faint horror and sympathy.  He didn’t notice; he was still intent on our visitor. 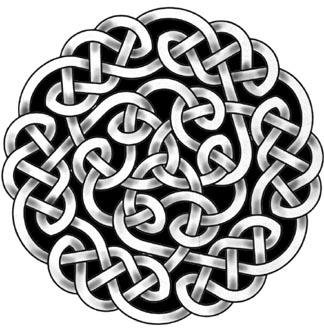 Phelan took a deep breath and exhaled slowly.  “Something that was meant to be passed down, not locked away in a museum someplace.”  He dug around in the pocket of his jacket and took something out, a pendant very much like the one I’d lost, though this one was larger, almost like a medallion, and on a heavier chain.  J.T.’s eyes widened and the air went out of his lungs.
“Teague asked me to come.  Actually, it was mostly Kira that needed me to come, but I got a late start.  I was supposed to be here twenty-three days ago.  Got distracted by something shiny.”  He held the medallion up by its chain and offered us a wry smile even as J.T. walked slowly toward him.
I don’t think Phelan ever saw the punch coming.