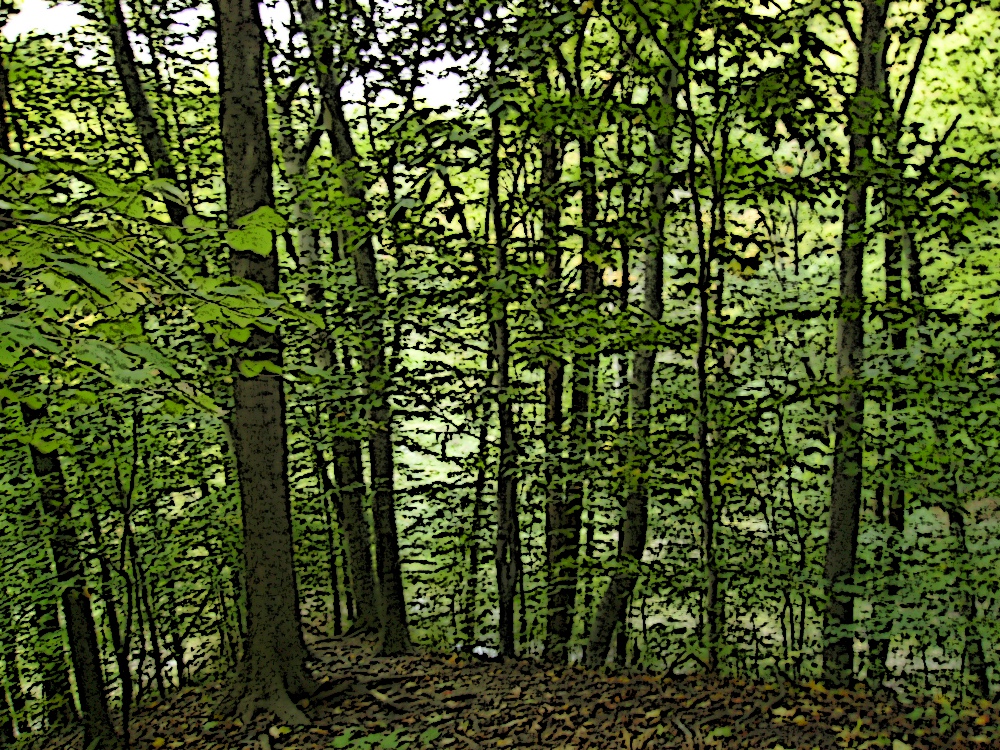 I cast a doubtful glance at the slope before I sighed and nodded.  Either my knee would take it, or it wouldn’t.  “All right,” I said quietly.  “Let me go first.  That way if I fall, I’m not going to take you down with me.”
Phelan gave me a questioning look before understanding dawned on him.  “You’re sore.”
“More than a little.  I did something to my knee when I landed in that pile of bookcases.”  I started to ease down the hard-packed slope, moving from root to sapling to avoid tumbling headlong down toward the marsh below.  Phelan followed, keeping one tree or root behind me as we picked our way down the steep incline.
“How long ago was it?  That first time you saw a camazotzi.”
“Almost two years ago,” I said quietly as my feet hit the marshy turf of the ravine’s bottomland.
He landed next to me, blinking.  “That long?” he murmured, sounding surprised.
I shrugged slightly.  “Yeah.  He stopped believing a few months later.”  I took Phelan by the hand and picked my way across the soggy ground, working mostly by touch and instinct to find the place where we’d been that night.  “It was weird.  The night down here, the two of us with Drew, that’s when I knew he believed, and knowing he believed made me feel…I don’t know.  Safer.  Like I wasn’t crazy.”  I stared out across the tall grasses and sighed quietly.
“I know I’m not crazy.  It’s just nice to not have to justify my gut instincts sometimes.”
Phelan squeezed my shoulder.  “Well, at least you know you’re not crazy.”
I snorted humorlessly.  “Yeah.”

My heart beat so hard I thought it was going to come right out of my chest.  I crouched with Drew and Thom, trying to catch my breath.  “Did it follow us?”
“Give me your pendant,” Thom said quietly, fingers tightening around my arm.
My lips thinned.  Then I felt it, heard it.
We hadn’t lost it after all.
I jerked on the chain.  The old clasp slipped and I passed it to Thom, who weighed the pendant in his hand, then held it like a skipping stone.
“When I throw this, run,” he murmured.
I blinked at him.  “Thom?”
“Just run.  I’ll be right behind you.”
I looked at Drew, who just nodded.  I straightened up.
“Get ready,” Thom whispered.
Then I saw red eyes flecked with gold in the moonlight.
Thom whipped the pendant at the thing.  Drew and I turned and began to run, down along the creek toward the bridge.  The creature roared.
Out of the corner of my eye, as Thom began to follow us, I saw the boy—tall, gangly to the point of being almost painfully thin.  His blue eyes glinted in the moonlight, wide with panic.  He stood, transfixed and watching as we fled.
Then the boy dove for a glint of silver laying in the mud.  His fingers closed around it as another of the camazotzi appeared from the darkness.
It was suddenly daylight, sun shining down through trees that were suddenly older.  The boy straightened up, brandishing the pendant—my pendant—that he’d found in the mud.  Light built around him, around his hand, so bright that the creature reared back for a moment.
Then it struck, and I screamed.

I bit Phelan’s hand when I came to, eyes wide.  I was soaked to the skin, flat on my back in the marshy ground.  He was on his knees next to me, staring down at me.
“Does this happen often?”
I took him by the wrist and pulled his hand away from my mouth.  I was hoarse—I must have screamed in more than just the vision.  “How long was I out?”
“Only a minute,” he said, starting to help me sit up.  “What did you See?”
“You say that like you know I saw something.”
His expression was deadpan as he stared at me.  I just shook my head.
“Something that doesn’t make sense,” I said softly.  “And let’s just leave it at that.”
“All right,” he said softly.  He looked around slowly as I got my feet back under me.  “There’s something down here that feels like it’s holding things at bay, but barely.  Some kind of portable ward.”
“Might be my grandmother’s pendant,” I said softly.  “Thom threw it at the creature so we could get away that night.  We haven’t been able to find it since.”
Phelan looked at me curiously.  “We could try to find it now, if you’d like.”
I hesitated, thinking of the boy in my vision, thinking about how painfully like Thom he looked, and shook my head slightly.  “No,” I said softly.  “No.  I think it’s meant to stay out here until someone else finds it.  Someone who really needs it.”
He looked at me strangely for a moment, then smiled.  It was as if realization had dawned on him, as if he realized what I must have seen when I dropped like a sack of rocks.  “I understand,” he said, then squeezed my shoulder.
“Well,” he said briskly after another moment, “it doesn’t look like there’s much to see down here, then.  Shall we head back up?  You could probably use a change of clothes.”
I laughed weakly.  “Yeah.  But we’re not going to go back just yet.  There’s one more place to show you that’s easy to get to.  You need to see that first.”
“Oh?”  He shrugged.  “Lead on, then.”
“Right.”  I turned and headed back to the steep slope.  He hesitated for a moment, staring at the grass, at the trees.
He said something softly under his breath that I couldn’t understand, but I suddenly felt more at peace.  When I glanced back over my shoulder toward him, he’d begun to follow me again.
I mounted the slope and began to climb, cursing a bad knee and steep inclines.  I was going to be sore in the morning, I knew that much for certain.
It took us three times as long to make it to the top as it did to get to the bottom.  I collapsed onto the bench, breathing hard for a few moments as Phelan struggled the last few feet to the top as well.
“And you’ve climbed that in the dark?” he gasped as he sat down heavily next to me, leaning forward with his head almost between his knees.
I laughed weakly.  “No, just gone down it.  I think Kellin and Rory have, though.
Phelan shook his head, grinning wryly.  “You’re all crazy.”
“Takes one to know one,” I fired back, then stood up slowly.  My legs throbbed, but what came next would be an easier walk.  “Come on.  One last stop.”
He groaned.  “Please tell me no more climbing.”
“No more climbing.  I promise.”