We made our way out of the arboretum and back to the concrete pathways of the lakes plaza.  As we drew closer to the library, our shoes crunched on broken glass and I could see deep gouges scraped into the concrete.  My lips thinned.  “Some of them chased J.T. and Drew and Carolyn here,” I said quietly, toeing some of the glass away from one of the deeper gouges.
“What were they doing out here?  Looting the library?”  He gestured toward the windowless ruin.
I shook my head slightly.  “No.  Carolyn—the fairies—Carolyn—”  I fumbled for the words until Phelan touched my arm with a knowing smile.
“I saw the little one on her shoulder.  She sees them clear as day, doesn’t she?”
I swallowed and nodded.  “Yes.  She always had…glimmers…of them even before this all happened.”  I started to walk again, and he kept pace with me.  “Still came as a shock, though.”
Phelan grinned.  “Sometimes, these things do.  So what were they 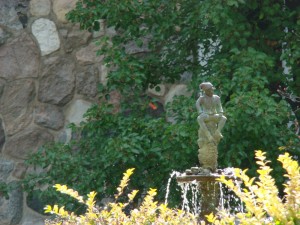